This is just a small collection of thoughts after the Appcues design team took an outing to visit the exhibit on the Bauhaus at the Harvard Art Museum.

Keep in mind I'm not a classically trained artist or designer at all, so these might be obvious, or they might be interesting. In any case, I really enjoyed it and it got me thinking about my craft a bit.

One thing that struck me, perhaps by the way the exhibit was arranged, was the difference between art and design. There's a paradox at play: they're so close together, while at the same time often so distant.

Art follows a striking amount of process and principle, on display in visual studies and experiments.

Art and design share many of the same concepts, but art has the unique property of having very few constraints. The self-imposed ones, sure: the size of a canvas, the form, the materials. But maybe not close to the constraints of design: utility, use, purpose, fit—and all the human ties that come with those.

The industrial design and architecture still had all of the visual concepts embedded deep within them—joined gracefully with additional constraints.

Most of the art pieces were on one side, and the architecture on the other. It made for an interesting contrast. Still thinking about this one.

In the architecture half of the exhibit, I kept noticing a neat trend. During its formation, a sketch or concept would focus so intently on one concept—and fade off into the distance where the edges of that concept fell away.

Focusing entirely on one perspective or thought, Walter Gropius could capture the feel of just that, with maybe 40 strokes. Everything else left out.

Fidelity—detail, attention, energy—was spent only on what mattered at the time. The sketch or idea was complete for a single focused thing. Color, form, language was used to focus on the details of what mattered for something specific, not yet a fully joined whole.

Eventually, of course, things would be brought completely together and detailed in full—also a sight to see. But only after the formative stage.

Even in the detailed and more high-fidelity views, there was attention to what was shown and how it was arranged; what was included and what wasn't.

The use of color in the above was so intentful and graceful: I love the blue water in the plan flowing into the sky in the perspective view below it, into the same sky in the interior view, and connecting to the same blue in the water in the vista above. It captures a clarity of how it would feel to experience the building in real life, and still pulls you in to what's really important.

The core concept is to open the space to the sky and water and how they're connected. The image tells a story through that selective fidelity—the only thing in color is the thing that's most important.

I'm definitely going to try to take this lesson of focused fidelity, intentful fidelity, and fidelity of emotion and feel into my own work.

In general, it was a delight to see the process behind the form, function, and beauty that this movement achieved so consistently.

It was clear there was a connection between the simple forms, colors, relationships, and theory in the artistic studies and pieces and the same ideas expressed through architecture, industrial design, and even city planning.

If you're interested, take a look through the whole collection on the Harvard Art Museum site—there's a ton to explore and learn from. 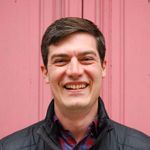